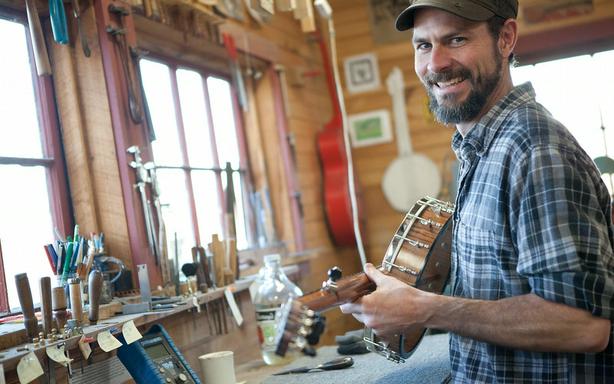 I love the fact that open-back banjos have never been standardized like some instruments into one design that all makers imitate.  It seems the variety of tones that can be created by varying and combining different elements is never ending.  I generally like to mix elements which enhance either the high or low end, leading to banjos which have a full tonal spectrum and a well balanced sound - rich, deep, round and full, but not muddy - I like plenty of crisp, clear high end to cut through, whatever the playing situation.

In terms of playability, I have spent a lot of time designing the basics of the banjos I make.  I prefer shorter scale lengths which put less tension on the strings leading to a slightly looser feel while playing and also moves the bridge closer to the center of the head which adds warmth and richness to the instruments tone.  I like a nice low action over the frets, but a higher action over the head so there is plenty of room for your thumb when playing clawhammer, and a wider fretboard which increases access to the strings when drop thumbing.  Additionally, I prefer a fairly tall, one-foot cherry bridge which increases sound transfer to the head, doesn't sag over time, and adds a slight tonal warmth that you don't get with standard maple bridges.

Although, technically not as important, I feel that a great sounding and playing instrument should also be beautiful and elegant.  I love the look and feel of a simple, well crafted banjo which emphasizes the natural beauty of the wood and metal hardware as well as the overall lines of the instrument, but I also love more highly ornamented banjos.  In the last few years I have started adding brass and German silver plates to some of my banjos using exposed screws and rivets giving them a slightly industrial look.  Additionally, I have also been including intricate pearl engraving, both in the classic style of the late Victorian age Boston banjos and in a more contemporary, nature oriented style.

I grew up on a wildlife management preserve on the Eastern Shore of Maryland, a beautiful rural area on the Chesapeake Bay teeming with wildlife and covered with swamps, ponds, creeks, forests and fields.  Because of this, and the fact that my father was a wildlife biologist, I studied biology in school and eventually ended up with a Master's degree in Freshwater Ecology from Cornell University.  During this time I did a lot of field work surveying, collecting and identifying aquatic insects, fish, flowers, trees and birds.  I didn't realize it at the time, but this early exposure to nature, and my identification work, would later turn out to be invaluable for the organic style of ornamentation which I am drawn to, and the highly detailed work of instrument making and engraving.

In 1996, I started a year long apprenticeship with master banjo maker Mac Traynham.  I loved the experience and came away with a beautiful banjo that I played for the next ten years.  I never thought banjos would become my full time occupation, but after 10 years of making banjos as a hobby, I decided to follow my passion and officially started making banjos under the Buckeye Banjos name in 2006.  Since then I have made over 200 banjos for musicians all over the world, and have never regretted my decision.

As far as my personal life, I live on a 12 acre homestead at the base of Buckeye Mountain in Southwest Virginia with my wife Cindy Jane, one dog (Tucker) and three cats (Rosie, Biscuit & Foxy).  Cindy and I play in the old-time stringband Farm Use Only, and when not making banjos or playing music I love to slowly improve the farm, garden, hike, kayak, mountain bike, read, make hot sauce, do Yoga and curate my vinyl collection.
View on Mobile